Since the Wibbell++ competition ended Forks has remained quite consistent. The number of companies has changed form 6 to 5 (and back to 6 for 5 player games), and one particularly memorable playtest session resulted in a key change to the 2 player game (it turned out not removing any cards and having hand sizes of 12 was as ridiculous as it sounds). But the main change came in the form of Merge/Swap.

Forks has always tried to be about choices. The hook, that you give your neighbour the choices, is what make the game special. But during playtesting the feeling of control early in the game was questioned- if your earlier choices are based on future information, how can they be made? Now all games feature this in someway or another, a game with perfect information is a puzzle to be solved. But when playtesters say something designers have a duty to listen. So we tried a new rule (with thanks to Alex and/or Tyler- one suggested merge and one suggested swap, but I can’t remember which). 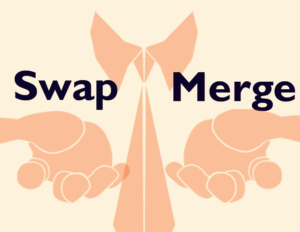 Merge enables you to merge cards passed to you with your hand. You then invest using any card from your hand. Immediately this enabled a feeling of control, and a sense of strategy. Players become capable of strategising; you might go heavy into one company early with the intention of dumping cards into it late, or keep low value cards you can throw away to not change a favourable board state, amongst others.

That worked, and the game immediately felt better, more solid as a game. And then we tried another rule- Swap.

When players draw three cards Swap enables them to swap one with an invested card in the middle. This makes the game a lot more volaitle, but a lot funnier. Sinking companies, or drawing investments from them introduced a tactical play to every draw. In order to make sure a card you swapped stayed un-invested you needed to embezzle it, and the options you had to pass to you neighbour increased with every card invested. The game was a joy to play, but a lot more brutal and chaotic than with the merge variant.

Both variants were excellent, drawing on different aspects of the game and making them feel quite different, even though the core remained the same, so we tried them together.

The game has far too much going on for a simple card game, and turns were taking too long. Fine for a 4X, but not for this. So the question was, which one do we keep? The strategical capabilities bought about by Merge or the laugh-inducing tactical chaos from Swap?

The answer- both, but never together. Easy to implement with a double sided card. Now players can choose which variant to play, although never at the same time. We encourage people to start with Merge as that’s the most straightforward, and everyone is also relieved when they realise it means they can get rid of the junk from their hand. And that’s why the card’s double-sided (although you are free to play both if everyone’s prepared for it).

In current news- currently looking at boxes, box manufacturing and box printing. The glamourous part of the job. I want to try and upgrade from the boxes used for promo copies, which wear a little too much (although that may be because I didn’t get a protective lamination, but still). Lidded would be ideal, it’s just getting them for a non-exhorbant price. The search continues!