Often the best way to help promote creative fecundity is to restrict things. My boss used to blinfold people and get them to describe polyhedrons to help with their use of descriptive language (note: he was a teacher). So it’s no suprise that 2017s BGG 18-card microgames competition got me thinking. Make a game with only 18 cards. Including rules and tokens in that 18. I love challenges like this, that make you rethink your ideas and conceptions, and trim down all that’s unnecessary. I wasn’t going to enter, but during the day my mind kept on coming back to it, and to my previously thought of as-yet-unamed-not-quite-social-deduction game.

As I mentioned prevoiusly, I got rid of the role cards, so the only things left were a tracker and the values. The tracker could be put onto three of the cards, along with the rules, leaving 15 for play. Obviously 15 cards is nothing, games would be over in a heartbeat, so how to extend? Recycle the discard pile. A small change, but one that leads to more complex situations. Now every card you discard has the opportunity to affect the score multiple times, whereas the ones you keep are out the game for good. The restriction had bought about an interesting predicament for players.

The system was set, now for a theme. I needed something strictly binary which players could push for, and settled for Rain or Sun. Players now had to take payment for the weather, but by doing so were making it less likely for that weather to happen. 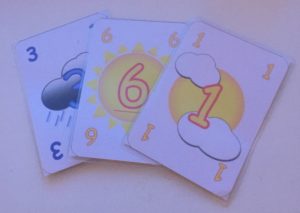 So I entered, and got joint best game! Which naturally I was delighted with. Looking back, it is a fun little thing, but the main issues were: the lack of cards in the game, even with recycling the discards it was too few and the number of cards needed to make the recycling have a big impact was massive. The second was choosing any other player. A lot of downtime was coming about from this decision, which also resulted in some players having very few cards in their hand and fewer decisions to make. I loved that central mechanic and decision point, but it was just slightly lacking and I wasn’t sure why (until another competition some time later). 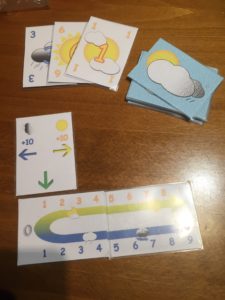 If you want to try Rainmakers it only needs 2 sheets of A4 and can be downloaded here: https://drive.google.com/file/d/19rUsTvn6RS3Gr_Llx_J83RIrm3Obobnm/view