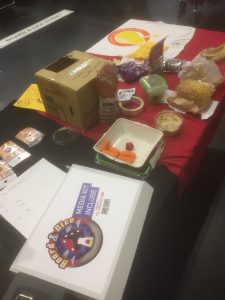 I’m pouring my brain out from the recent Expo so I don’t forget and to help me move on. Hi everyone, what an Expo. Seriously, what an Expo. If you were there and you came to the SUASD stand on Friday you probably even met me, I was the one who wasn’t one of the famous ones you wanted to see (unless you were picking up Sherlock Holmes Consulting Detective, in which case enjoy it!) and I probably sold you some pins. That was my Friday, and it was brilliant. 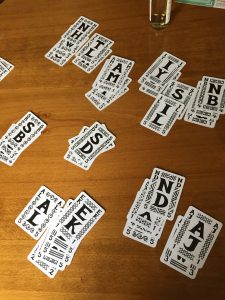 Oh and I bought Wibbell++ from Stuff By Bez, actually from Bez as he passed the stall, and it’s great fun. Wibbell++ is really just a really cleverly thought out card system for playing all sorts of games. Each card has one of the more popular letters at the top, and a less popular letter at the bottom, meaning you’re never really stuck with a shoddy hand of letters, and the possibilities spiral out. We played Wibbell and Phrasell, but we’re already coming up with new ways to play. Definitely a recommendation. 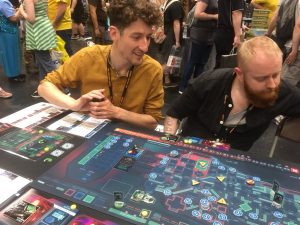 Saturday! Some more pin selling and then I got to play Lifeform from Hall or Nothing productions, with SUASD. I had a great time, not because of the game (although that sounds too dismissive, it appeared fun, but with so much overhead by the time the designer had finished teaching it we only got to play a few rounds. Also everyone wanted to be the cat), but because I got to play a pre-release game with SUASD. Woop woop! Then it was straight over to enter the Tinkerbot Games Arts and Crafts competition and playtesting From The Ground Up.

As always the playtesting was time well spent, but unfortunately during a discussion with Foxmind games the vening before, I’d already decided upon a few changes I wanted to make, and playtesting with the non-current setup always feels worse. However, I still got a lot out of it, and the people playtesting all had a great time and gave valuable feedback, so thanks to them and to the volunteers and Rob Harris for making it possible. 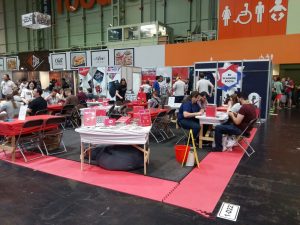 Whizzed off early because SUASD were going to play NewSpeak, but due to timings that didn’t happen. Instead I had a rest and caught their show, played a couple of games of Kingdomino (perfect filler gaming. Still waiting to see if I need Queendomino at this point). Then off for an incredible evening- drinking with SUASD listening to Martin Wallace tell anecdotes, none of which I can repeat, followed by meeting the Heavy Cardboard group- incredibly friendly, I hadn’t heard their podcast before and now I subscribe, they are just that nice- and getting them all to play NewSpeak. My weekend was made when Quinn said he was having fun then. Poor Matt though, Paul and Jess broke him through simplistic codes. 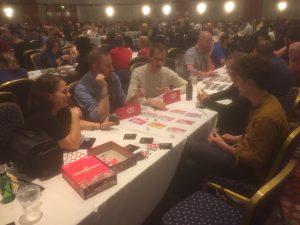 Sunday! The first day I really had to play games and not shill various things! The games were: 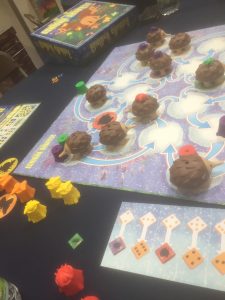 Echidna Shuffle. We all know echidnas and platypuses are the only two monotremes (egg laying mammals) on earth, but what you may not have known is that Echidna Shuffle from Wattsalpoag is a lovely family game with satisfyingly chunky echidnas. Players move echidnas out of the way trying to eat bugs, and the whole thing plays like a competietive car park exit simulator but cuter. Unfortunately Wattsalpoag have a habit of selling everything at the UKGames Expo for ridiculously cheap, and they’d sold out by the time I could play (the perils of Sunday gaming). 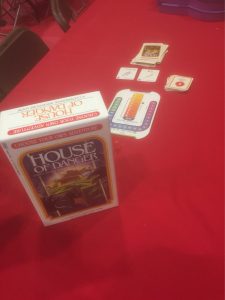 Also played House of Danger. Imagine an old school Fighting Fantasy gamebook, but all the pages have been torn out and shrunk into cards, and instead of writing down equipment and status you have cards and markers. Now you’re imagining House of Danger. I had fun, I really did, but I’d honestly balk at the price point given when I asked, considering the best FF gamebook of all time, House of Hell, can be bought for pennies from most charity shops in the country (I would also accept Creature of Havoc, or Legend of the Shadow Warriors (side side note, I’ve just googled these and they appear to have gone up in price massively, maybe the suggested price of this game isn’t too bad)).

Finally it was the Tinkerbot competition. If you were the guy with the bee box then congratulations, and we were the people behind you who kepton shouting ‘Betrayal!’ everytime you put something on it and opened it. That shouldn’t have kept us as entertained as it did. To the lad with the safe cracking game- you were robbed, no pun intended. As for me, I was really happy with my entry. Really happy. It’s something I’m definitely going to work on and take as far as it will go. As for entering another one of these? Not for me. Luckily my game took about as much time to explain as it did to create, but I really felt for some of the groups who had spent ages making stuff, but for naught. If you do enter next year my advice would be to make the gosh darned best arts and crafts project you ever did make, and use all packaging materials for decoration. And then write down some game thoughts.

Other stuff- my mates played Ghostel and really enjoyed it, so that’s one to watch, but unfortunately I didn’t get the chance. Holding On- the Life of Billy Ker, was vetoed by one of our group on account of theme, but I managed to sit awkwardly close to Michael Fox when he was running a game and vicariously feel part of the experience. I can understand people’s personal reluctance given the theme though. And the designer speed dating was really good fun. Useful no matter what, but as always fingers crossed. And I late pledged Chronicles of Crime after seeing it in action. No Regrets!