I saw a game advertised yesterday, Walls of York, which prompted me to write this. But I want to emphasise, for all of this post I’m just talking about theme, not mechanics (but I will explain why it’s important).

I live in York. Love the city, probably one of the best places to live in the UK, or even the world. Steeped in culture and history, it’s a fascinating place, and would make a great thematic setting for a game. If anybody sets a game in York, I’ll be interested. So when I saw “The Walls of York” advertised I clicked through to see what it was about. I’m not an expert in the city walls, but I know they have a fascinating history (originally Roman, which were left to ruin when they left, palisades were built upon those foundations by the Vikings, and finally massive medieval walls were built on those foundations and beyond), and those walls you can walk around today, looking at the Bars (gates) and Gates (streets) with pubs (bars) on them. They’re ripe with thematic and mechanic possibilities, so someone making a game about them is a good thing, yes? 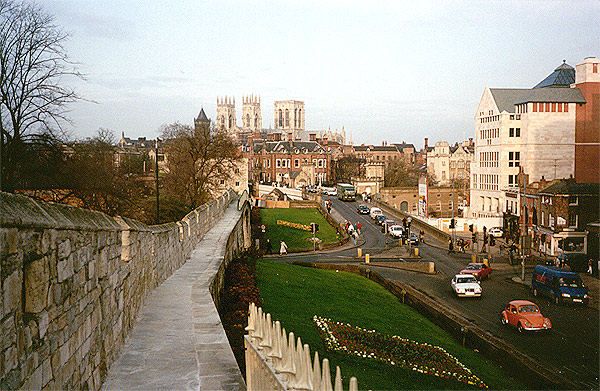 Well it should be, but I’m really disappointed with what Cranio Creations has done. Not mechanically, I haven’t played it so don’t want to comment on that, but thematically it’s really lazy. Watching the video I’m not sure if anybody involved has even been to York. Where are the rivers? The construction of the wall is lacking without the rivers, and the fact they damned the Foss to make the Kings Fishpool and changed the City is a lovely bit of history which would fit in. But nothing. And even worse, why are we walling out the Vikings? That bit makes no sense. The Romans didn’t wall against the Vikings, the Vikings certainly didn’t, and the famous medieval walls in the game, which really are ‘The Walls of York’ were constructed much later. It feels either lazy and ignorant, or jumping on the waning popularity of Vikings. In fact there’s nothing here which ties it to York at all. Could be the Walls of *insert literally any place*.

Some people are probably thinking this doesn’t matter, a game lives and dies on its mechanics but there’s a couple of reasons why I feel this matters. If a designer puts no effort into a theme, how much effort are they putting into the rest of the game? If they can’t even be bothered to do any research into where there game is set it doesn’t bode well for the effort put into the rest of the game. It’s not zero-sum. Effort in one reflects in the other.

As someone who knows and likes York, this lazy rewriting or ignorance of history put me off the game. You’re using the setting without delivering on the promise. I’d rather it had a fictional theme, than a butchered one.

And finally, I don’t want to have something which spreads ignorance, or doesn’t care about facts or history. If it’s not important to the designers, than don’t use it in your game. If it is important then get it right.

There are a couple of other games which just have a weird idea of Britain. Cornwall, a tile laying game in which you build Cornwall, has you placing all the mountains and swamps of Cornwall for points. Now as someone who spent just under 20 years in Cornwall, I’m not sure what Cornwall they’re thinking of. Trencrom Hill and Brown Willy do not a mountain range make. Again, just lazy and ignorant. Why not towans? Cornwall has them and other places don’t. Just a simple name and art change to actually make the theme sing. And the less said about Ticket To Ride UK not having York the better.

Also, it’s worth bearing in mind that these are nice places easy to visit. I can’t imagine how mangled some of the games about cultures and places further afield, designed by people who’ve only seen it in photos, must be.

So if you’re making a game set somewhere, please actually set it somewhere you know (Cornish Smugglers did this), or research it (see Feast for Odin for a fantastic almanac of research, or the upcoming Holding On: The Troubled Life of Billy Kerr, in which Michael has told me they spent hundreds of hours researching the real life places and events which occur in the game). It’s just showing some respect to the consumers, showing them you actually care about all of the game.