A bit of synchronicity the other day when I listened to a really interesting podcast (http://thespiel.net/node/1159 ) about teaching using games, and then immediately read a post on the Shut Up and Sit Down forums about using games to teach maths. Here I have some experience (about 10 years of teaching maths and an accredited PD Lead for maths teaching. Running chess and boardgames club (or both) throughout this time. Also some games experience, a lot playing, some designing. Not as much as teaching maths though). So rather than a blog post about pretty much nothing, here’s the best blog post I’ll do given it’s about something I actually know.

So, what’s the key to using modern boardgames to teach maths?

A qualifier here: I’m specifically talking about maths. Games can definitely be used to help teach soft skills successfully, and I’m not an expert in other subjects. Indeed, listen to the podcast above to hear how games are used successfully in other parts of education. Secondly, there are some games I use for teaching, but these are in no way modern boardgames or even in the style. And there are some games I play which are in a modern boardgames style, but they don’t teach maths.

Why not? Well I’m speaking from experience here. These are some of the games I’ve tried to use to teach concepts:

Now stepping back, it’s obvious from the outset that both those issues would occur. How could they not? If I’m playing a good game I’m focusing on winning that game, and I wanted to make good games for the students. But it was because I was chasing the elusive beast that is engagement. But as Professor Robert Coe argues here: http://www.cem.org/attachments/publications/ImprovingEducation2013.pdf   engagement is a poor proxy for learning (aside: I love the title ‘A triumph of hope over experience’).

Engagement is easy to observe, and learning isn’t. So when I had lessons with a lot of engagement that the student’s loved I thought I’d succeeded. Clearly, as described, I was wrong.

I was wrong to use modern style boardgames to teach maths, but that doesn’t mean I don’t play games. But there are two different situations when I do this:

The extremely simple games are just as described. Games like Bingo, the decimal ladder game (ordering random decimals on a ladder), the Factors and Multiples game or even the Ten Ticks roll and move substitution: 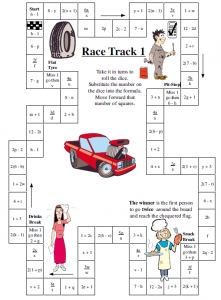 These can be used to draw out students understanding with pertinent follow up questions (which square do you want to roll a low number on? On which square does it not matter what you roll?). But the key thing here is the games are simple. They don’t introduce cognitive overload and as a teacher I know what understanding I want the students to draw out from playing them.

The final one is spending an entire lesson playing a game. There are a few I’ve created (the Smoothy Game, which is a worker placement game with resource conversion; an Elf Game which uses simultaneous action selection on the iPad; and a variant of Masters of Commerce for a class of 32). These all go down incredibly well, enjoyed by all students and I even have fun running them. But they’re not about teaching maths, they’re just about having fun playing games.

All of which isn’t particularly nice. As a gaming maths teacher it feels as though there should be a game which can be used to teach maths whilst also being a great game. But then perhaps if there were all we’d end up doing is putting kids off playing games, rather than enticing them into learning maths.