I played two games last weekend which had an alternative time length variants- Civ: A New Dawn, and Lords of Xidit. Whilst I really enjoyed both of them, the optional time changing variants seemed odd to me. I’ve written about pace for a while now, the length of time a game takes is more important than just being how much time until the next game. It changes everything about how the game feels. That both the games have a time altering variant in the box is odd enough, that one is shorter and the other longer is more unusual still. 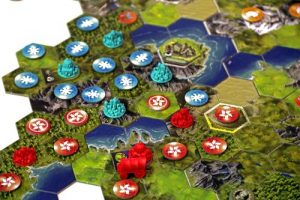 With Civ we played the normal variant. It’s a really efficient Civ game, and although the first time you play you perhaps miss a little something in the efficiency of it all, that’s a better feeling than one of the game dragging out. In fact, because of it’s brevity we managed two games in one sitting, something which would be unheard of with Nations, Through the Ages, or even the original Civs. It’s a streamlined game and knows it’s a streamlined game, even if the board felt a little too big (going to try with only a couple of pieces in the middle next time). So the optional ‘epic’ variant is a bit baffling to me- it’s the same game, but played a little bit longer. Whilst I’d be happy with some expansions which add to the experience, the thought of just playing longer doesn’t appeal to me- the elegance doesn’t do to be drawn out. 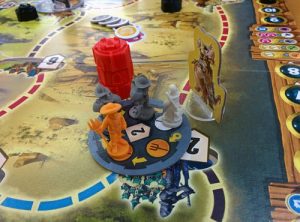 Lords of Xidit, by contrast, comes with a shorter variant. Now that’s usually a red flag screaming ‘the first time you play this game it will take 7 hours’ and it was our first game so we opted for the shorter variant. Probably a mistake. The game was quick, incredibly quick, by the time I figured out what I was doing there were only a couple of turns left. Whilst I feel I experienced the game, and could tell I enjoyed it, I didn’t experience the game the designers had intended. Rushed through 3 fewer rounds may not sound like much, but the tempo was much quicker and there was less time for strategic play. Essentially it became a semi chaotic mad dash for points, no matter where they came from. It left me wanting more, but I hadn’t felt I’d actually played the game proper, more a demo version. Really didn’t think the shorter version was necessary here.

That said, I’m still sticking to the shorter variants when I first play a game. Both Le Havre & Dominant Species play differently without them, but I’d never have got them to the table for the first time without that introductory game in there.

Shorter version of this: designers have faith in the length of your game and refrain as much as possible from putting in a longer or shorter version unless it’s a 4 hour epic you’ve baited with a 2 hour variant.