This started more as a to do list for myself, but figured it’d probably be worth blogging about. So after the last post about (possible) great games at the Expo, here’s some stuff for designers to check out/ do:

Playtest! Playtesting your game is always the most important yet often most troublesome thing to do. Playtest UK will have tables and signup forms. This is a really valuable opportunity for all designers- get your games in front of people and find out what they really think. Better still, those nice volunteers will find people to play your game for you, and everybody understands it’s prototype time. Obviously, after (or before) having your game playtested, try and playtest someone else’s! 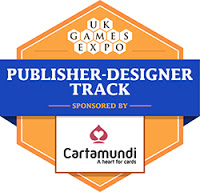 In addition, Playtest UK are running the Speed Dating, Networking and Wyvern’s Lair events. Whilst the dating and lair are way (way) too late to enter, you might still be able to join the networking event. Most designers will want to pitch to publishers, but not whilst they’re trying ot market their own games. The networking event (and the speed dating obviously) are the perfect times for this).

Seminar’s. Here’s the design seminar timetable from the Expo’s website itself: 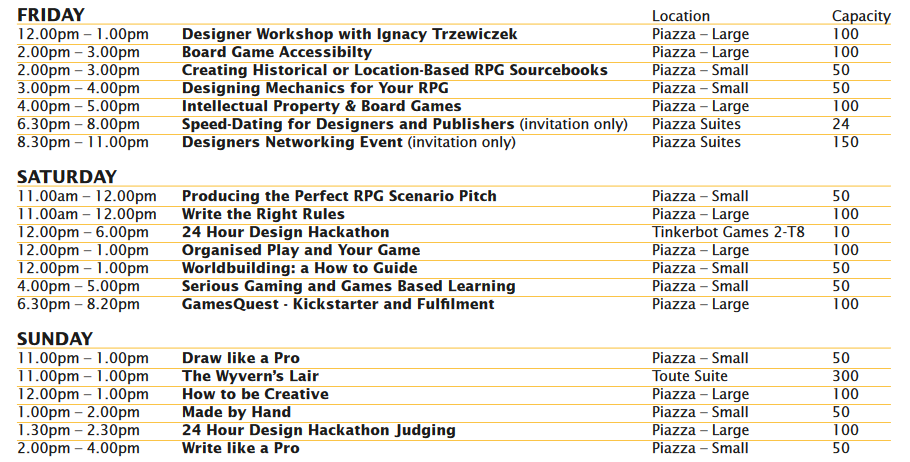 There’s a lot of great information and advice there, being doled out for free. Obviously you can’t make everything, but I always find it worth going to one or two seminars and talks.

Tinkerbot Hackathon (2-T8). Sounds fun. If you’re one of the 10 who manage to make it, good luck! The redesign contests in the past were really popular, so I predict a queue for this. Will probably be proved emphatically wrong now.

Manufacturers, distributors and artists on the floor. Thinking of going down self-publishing and/ or kickstarter? These people are the ones you need to speak to. I’ve made a quick list here of just the manufacturers and distributors (no judgements, just c&p from the expo programme), but if you are self publishing you will need good art. Don’t neglect it:

(there are probably others I’ve missed- Wingo have tweeted about being there, but I can’t find them on the list for example)

Let me know if there’s anything else I’ve missed, and I hope this expo is a fruitful one!